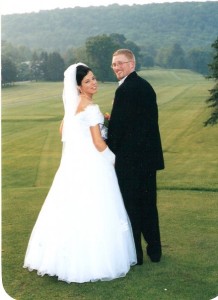 I remember the conversation we had when I revealed to him the debt I was going to bring into our marriage.  He responded with such graciousness.  We committed to eradicating this debt within the first year of our marriage.

This was good.  Becoming completely debt-free is one of the best decisions we have ever made.

I am a pretty low-maintenance kind of girl, so I quickly adapted to the way Wes handled money due to his frugal up-bringing.  I did have a few ground rules, however:

Oh, every once in a while, I would buy a Sunday paper and make a lame attempt at using a coupon or two.  Instead, the stack of coupons would usually just sit there laughing at me that I had spent a whole $1.50 on them.  I was convinced that when God was handing out the couponing gene, He skipped over me.

It took Wes’s lay-off a little over a year ago for me to realize that there was so much more that I could do to save money.  I was pregnant with our second son and would be giving up my part-time job as a result.  Who knew how long we would be without an income?  I had no choice but to learn more about those evil things called coupons.

I began asking my friend Beckie, whom I lovingly referred to as the Queen of Freebies, to PLEASE mentor me through this foreign world of coupon clipping, deal hunting, and freebie finding.

Little did I know that my world was about to change.

I wrote this in my other blog a few weeks later:

Hi. My name is Kaley and I’m an addict.

I never thought it would come to this.

It all started because of Beckie’s influence and now I’m having a hard time pulling myself away from my coupon clipping, ad-scanning, web-surfing addiction to even tell you about it.

My mind is overflowing with CVS extra bucks deals and Rite Aid single check rebates and Price Chopper’s triple coupons and the sale prices of dozens of items.

Beckie tells me that in a month or so, I should be back to my normal self. I will no longer have nightmares about missing out on a free after rebate deal. I will stop making my husband wait for 45 minutes in the car while I just “run in” to CVS….for the third time that week. And I will be able to dedicate a little bit more time to the non-essentials in life like cooking and cleaning.

Eventually life did return to normal–but  a new normal.  My inner deal-hunting diva was discovered and I realized how do-able saving money really was.

Soon I began sharing what I was learning on my blog and quickly realized that I enjoyed helping others find deals as much as finding them myself.  I mentioned to Wes one day that I might actually enjoy creating a blog, chronicling our journey of saving money.  He loved the idea.

And that, my dear readers, is How We Got Here.

« Cellfire ecoupons: A simple way to save money
The Cha-Ching Challenge Highlight »